Technology behind the car:
The car itself is extremely innovative, technical, and advanced. In order to properly design the software behind the car and the appropriate measures to take in any given situation, the Google engineers mined data from different cars; in total they monitored over 200,000 miles of driving. After analyzing their findings, the engineers came to the conclusion that people do not, in reality, follow the rules of the road. And thus, Google thought it would be best to have the cars respond to many of the unwritten laws of the road that people are more likely to follow.

The Google cars have many advanced, state-of-the art sensors. The most advanced and the centerpiece of the car is the Light Detection and Ranging technology (LIDAR). LIDAR is a technology where 64 lasers spin at about 900 rpm to give a 360 degree view to the driver. This is to create a detailed 3D map of the surrounding environment in order to view all obstacles in real time. The software uses the LIDAR map and information from Google Maps to obey local traffic laws and rules of the road. The car is also equipped with sensors that determine the position of objects behind or in front of it.  A video camera is attached to the driver console that checks for stoplights, bikers, and pedestrians. On the left wheel of the car there is a position estimator that detects the RPMs of the car, speed, which helps determine a more accurate position of the car. The attachments to the car are advanced and provide the car with accurate information in real time. and accurate sense of surrounding that can make it a better driver than a human 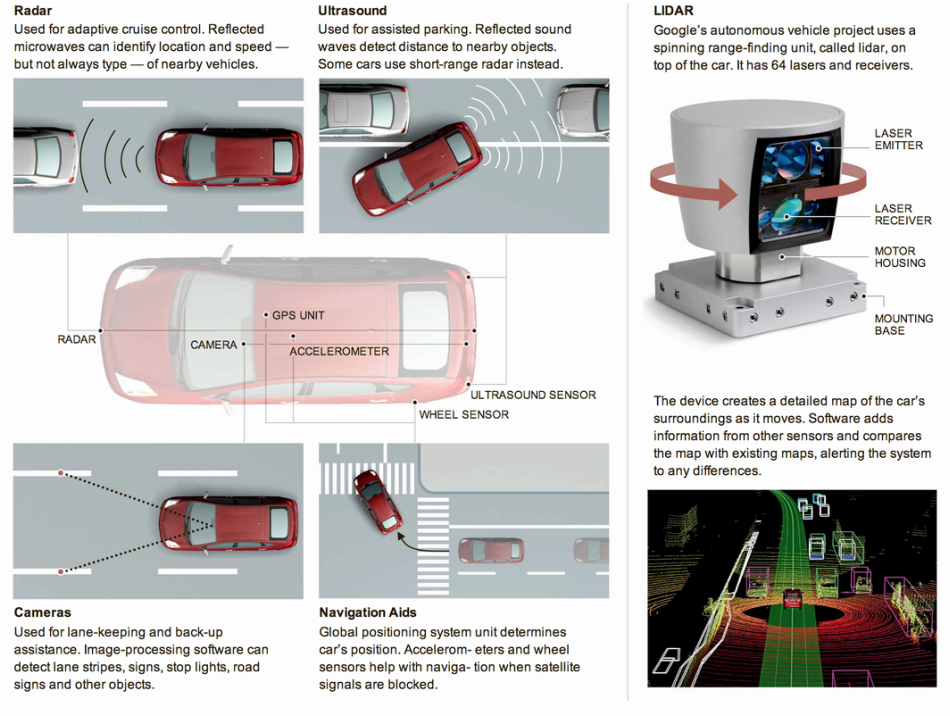 www.nytimes.com
One interesting emerging technology that could be revolutionary in the future of autonomous cars is the concept of vehicular communication systems. This will allow vehicles to be able to communicate with each other and the associated commands will make it possible to dynamically route traffic in ways to optimize traffic patterns by maximizing flow an minimizing travel times. This innovation could completely change the way we look at transportation and even provide predictive measures to traffic.

Costs:
However, don’t expect a mass production autonomous car to come out in the next few years. Google has not announced any plans to make their Driverless Car available for purchase yet. The sensors and chips for this car astronomically expensive. For instance, LIDAR alone costs around $75,000.  Prices as to the whole setup cost around $150,000. This is way beyond the price scope of 99% of drivers. However, the costs in the future, once economies of scale kick in, are expected to drop and be able to be scaled down readily.