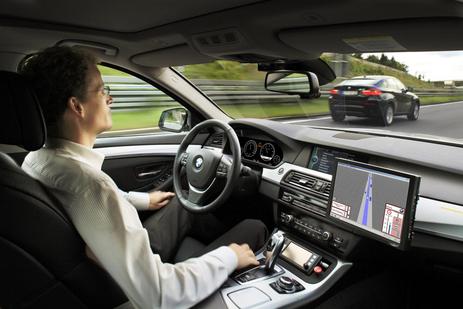 Source: www.tekblurb.com
With new technologies there is bound to be a policy vacuum. Do current driving laws need apply to autonomous cars? Or do we have to draft up new legislation? With regard to many of the ethical dilemmas, there needs to be some sort of framework to account for the liabilities of accidents. There are bound to be massive lawsuits when it comes to a driverless car getting into an accident with a manually operated one. There needs to be a detailed layout of many of the common accident situations in order keep the public well informed as to possible liabilities.  For instance, who is liable when a self-driving car runs a red light? Google co-founder Sergey Brin responded, “Self-driving cars do not run red lights.” However, there is still a chance they do and in that instance who bears the burden of the fine.

The most worrisome issue has got to be with system vulnerabilities in the software. We would need to draft legislation that sets high standards with regard to system security and system testing. Currently we have many serious issues with exploits in current operating systems and applications but how risky will it be if the compromised computer is driving at speeds over 60mph? Event though the technology might work flawlessly in practice right now, who is to say someone wont hack the system and leave almost the whole world at the mercy of a ‘ghost car.’ Who becomes liable for that and how can you prove that it wasn’t your fault?

This begs the question as to the future direction and implications of large-scale adoption of the autonomous cars. In the future will there be a complete policy shift and adoption of exclusive lanes for driverless vehicles? Or will there be a few ‘slow’ lanes for manually operated cars? Or even further in the future will there be legislation that makes it illegal to manually drive a car on public roads. Politicians will undoubtedly have to address the future issue of not having humans even in the car. What is the protocol when the car is driving itself and there is no human present and the car gets into an accident? It obviously no the humans fault so where does the liability rest, with the company, with the owner? Also, this autonomous technology can obviously be transferred to other vehicles like trains, streetcars, subways, ships, and even aircraft and thus more policy will need to be addressed to fill the policy vacuum.

Even though the technology is there and cars are being tested, there is still a long way for all the policy to be addressed and the future to become a reality.